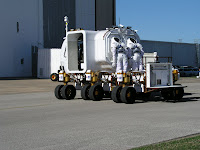 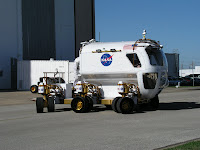 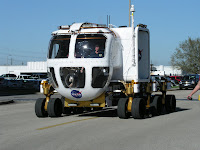 Before it gets to space, a moon buggy will make history by being the first to boogie along an inaugural parade. NASA will participate in President-elect Barack Obama’s inaugural parade with the crew of the latest shuttle mission and a small pressurized rover that is the current design for a mission to the moon in about 12 years. It will be driven by astronaut Michael Gernhardt. NASA hasn't chosen a final rover design yet, but the one in the parade is the leading prototype at the moment, succeeding wildly on a three-day desert trek in Arizona in October. It is different from the Apollo era open top rovers. It is sealed like a car, allowing two astronauts to sit in it without wearing bulky spacesuits.
Posted by Damaris Sarria Toepel at 9:51 AM

I only wish that I knew what the lunar dust will do to it!

The following information was taken from the NASA channel.

The pressureized rover is a concept vehicle
being developed for possible use by astronauts
upon their return to the moon by 2020. This
12-wheeled rover is about the size of a pickup
truck. It can comfortably house two astronauts
for up to 14 days, requires little or no
maintenance, and can climb over rocks and up
40 degree slopes on the harsh lunar surface.
The rover can "kneel," allowing its cockpit
to provide both wide and close-up view of
terrain for astronauts as they work comfortably
in shirt sleeves. Should they want to collect
lunar samples, they can quickly enter and exit
their spacesuits through suitports. The cabin is
removable, allowing the chassis to carry payloads
or be driven by astronauts in spacesuits.

Here are my opinions. The rover looks like it has several large blind spots. But, probably drives easily.

Over the years, we'll probably hear about problems involving turning all those wheels in harmony.

And, being able to remove the cabin is a potential hazard to be weary of.

I wonder what is it's top speed is. And, how fast they will drive on the moon. It probably depends on the terrain.

They'll probably bring the Apollo buggys back to Earth some day.

From watching the NASA channel, I have some questions about the buggy. These are mostly to learn about the vehicle.

The wheels looked small compared to the cabin. Will the buggy support unbalanced heavy loads or even turn over. This senario could lead to a damaged vehicle.

Is the concept of not requiring maintenace realistic. All trucks need to be repeatedly repaired. Planes get a lot more maintenance. They have to worry about air, pressure, temperature, radiation, the sun, food storage, etc.

The wheels are not under the cabin. What if a rock became caught inbetween the chassis holding the cabin and the wheels underneath. Someone could get stuck miles from home or seriously damage the vehicle because of this.

On the NASAA channel, when the buggy was unpackaged on Earth, it took 8 strong men to pull-out the 12 wheels from under the frame of the buggy (each wheel turned making an arc something like 45 degrees), at least 1 man was directing, and a crane operator lifted the buggy to the ground. The chassis of the buggy was moved down inbetween the 12 wheels. That's a lot of human involvement. Also, since the wheels were moved from underneath the frame that means if a wheel becomes damaged there are many possible positions for it. From underneath the frame to outwards. This could lead to an unbalanced vehicle. Also, those 12 men pulling the wheels did not involve weight lifting. It was like they were pulling against a rubber band.

It always takes a long time for astronauts to get outside during EVAs. On the ISS, the people doing an EVA camp out in the air lock for long periods (over night) before doing an EVA. They bring the air pressure down in the airlock area to prevent the bends. How can a buggy improve apon this time. A senario on the moon would be two astronauts ride in the cabin with only T-shirts and shorts for a day, they spend a day for decompression, spend 8 hours gathering samples, then back in the buggy spend a while getting the pressure back up to prevent the bends, etc. Is it really realistic to have this suitport capability. (If the astronauts make 14 day road trips it might be useful though.) Wouldn't a better capability be to feed one astronaut with tubes instead and drop the suitport. One astronaut could always be used to get out and push, and the other could drive. This would greatly save time!

Instead of having one vehicle why not have two instead. One vehicle with a cabin and one without. Why not drop this removable cabin capability. It is a source of horror and waste.

Instead of coloring the vehicle white wouldn't a bright orange be better. Isn't white a bad color on the eyes. Orange could be seen from space better.

What about external lights that can be seen from space.

What about mirrors or cameras to see behind them, underneath, the wheels, etc.

Will these rubber-looking wheels survive on the moon. Due to the excessive heat on the moon, could their expansion and contraction shoot a rock at an astronaut. Will these wheels give the correct traction.

Why does the truck have to kneel. Couldn't NASA just put a camera on an extendable arm connected to a TV.

On TV, the buggy shook back and forth a lot without any heavy loads. Does it need betweer shocks or something.


I'm no expert, but I wonder what the buggy will look like in ten years.

Your picture of the spacesuits is great, thanks.

I hope these suits don't get damaged by space dust or other flying regolith. Shouldn't they be in some kind of compartment. Because dust could build up on them and make it hard to move a leg or arm. They probably will be in a few years.

I like your picture showing the two rear cameras.

Damaris, i really like reading your blog. I find it really cool that you are pursuing your goals like this and that you want to become an astronaut someday

I hold a degree on electrical engineering and would love to work at nasa, it turns out that i also want to become an astronaut!

I am seeking a job at NASA this year, maybe we can meet up and share some stories.

I wish you the best!

Anyway, how are the astronauts protected from radiation. The Earth has an atmosphere to protect us, but will things like those thick plastic windows do the job.

Does the buggy have sunglasses. I mean, how will it protect the astronauts from the sun.

The lever to release the spacesuits doesn't appear to be safe. Over time, an astronaut could pull the lever, and things can go terribly wrong after that. Rocks, dust, debree, and other regolith can get caught in the mechanism.

I'm glad this is just a concept vehicle. What is a precise definition of such a buggy. Is it something such as abstraction for the real thing.

Loved seeing the rover in the Inaugural Parade! NASA still knows how to strut it's stuff! Way to go, NASA!

An all-Canadian moon rover is just one project being considered as the head of the Canadian Space Agency puts the final touches on a long-term plan to chart its future course.

But that hasn't stopped two Canadian companies that have been working on designs and testing parts for a lunar rover.

"We have done a concept study for the Canadian Space Agency of a rover that Neptec would provide the vision and system integration for, while a number of other companies would provide other pieces," Christie told The Canadian Press.

McGill University would contribute designs for a number of parts, including its wheels.

MacDonald, Dettwiller and Associates of Richmond, B.C., better known as MDA, is also working on its own proposed lunar rover.

Philip Murphy, MDA's vice-president of government affairs, says he wasn't familiar with the specific details of its proposal.

"We've got all sorts of different robotics ideas floating around," he said in an interview.

He wants the Canadian Space Agency to continue in the niches it has carved out for itself, like robotics.

Murphy noted it was 25 years ago that Ottawa invested in MDA's Canadarm "and the economic returns and prestige it gives Canada have been incalculable."

MDA was also the prime contractor for the $37-million weather station on the Phoenix Mars Lander which landed at the planet's northern pole in May 2008.

It transmitted weather reports from Mars while another instrument detected snowflakes falling from the clouds over the red planet.

The mission ended, as expected, in the chill of a Martian winter in November.

But the weather station, the size of a shoe box, also left behind a Canadian memento.

The word "Canada" capped with a small Maple Leaf flag was branded on a thermal blanket that was wrapped around the weather station.

MDA also built Dextre, a two-armed, $200-million mobile robot, which was sent to the space station in March 2008.

The 3.7-metre robot performs exterior construction and tasks like changing batteries and handling experiments outside the station.

MDA's space division was almost sold to a U.S.-based company in 2008, but the Harper government stepped in to block the sale.

Hurray NASA, I just found out that the buggy does have "some" radiation protection with water (hydrogen) in the walls of the concept vehicle! There would still be problems with solar storms and some cosmic rays.

Also, a lot of the Apollo astronauts were covered with moon dust. There are pictures showing this. So, the idea of leaving the spacesuits outside is another good conceptual idea.

But, is having a strictly workout bicycle under the buggy floor a practical idea? It may be a waste of valuable space.

Water in the ceiling will cool machinery, great. But, will it be enough?