It looks like Saturday will be the earliest attempt for the next launch. We will definitely know a decision by this afternoon. For those who aren't familiar with the Engine Cut-Off (ECO) sensors, here's a brief overview on how critical they are.

Sensors can "fail wet" or "fail dry." Failing in the wet state is considered acceptable since the shuttle is launched with more propellant than is actually required. If the sensors fail wet, the engines would continue to run and the shuttle's flight computer system presumably would shut the sensors down based on meeting orbital requirements.

However, if two sensors fail in a dry state, the flight computers would be misled into believing the tank was nearly empty and the main engines would be ordered to shut down early. Unless it happened extremely late in the climb to space, that could trigger a dangerous, untried abort scenario. A launch could end in an extreme tragedy if engines cut out too early to too late.

Here's a good schematic of the ECO sensors and their locations: 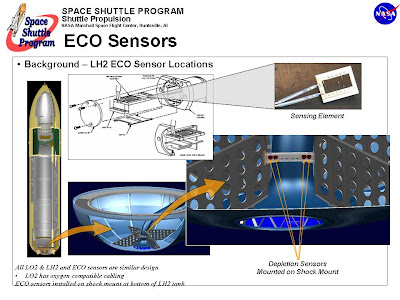 Posted by Damaris Sarria Toepel at 8:32 AM

yes, the ECO sensors cause quite some trouble. My understanding is that the issue this time is different from the previous times: we have a multiple sensor failing. That probably points into the electronics direction, not at the sensor itself...

More of my guessing in my blog ;)

What are your activities today? Are you somehow involved at the Cape? Or do you get a day off ;)

Rainer, it probably does point to the electronics side of things and not the sensors themselves. But I posted this little blurb to give people an overview of what the ECO sensors acutally do.

Unfortunately I don't get the day off. It's a full work day until we launch. Then, I head out to Houston the day after launch to support the on-orbit imagery inspection at JSC.

on second thought, it became clear I made myself a fool ;) Obviously you need to support launch preparations no matter what the outcome of the MMT meeting is. If you don't get Atlantis ready for a Saturday launch, they have nothing to decide on ;).

I even more appreciate that you take time to answer my post.

Keep up the good work. I am sure there will be a good and well-fact-based decision, whatever it is!

I don’t know, it could be the sensors them selves, look at the environment they work in, ambient temps of the surroundings, then cryogenic temps of the liquid propellants, and the "other" temps once the liquid has been depleted. They appear to be a simple piece of resistance wire, the resistance will change according to temp of a gas environment vs. a cryogenic liquid, they also look quite fragile (not saying they are, they have to be robust enough to take a fair g-load and vibration). In their defense, I work with thermocouples all the time and the only thing that surprises me more than how tough they are, is how little damage it takes to make them fail.

do you happen to have a close-up image of the sensing element? I am asking because I am involved in a discussion in a German space forum and having some more details are great. The schematic, though great, has a too-low resolution to obtain any details from it...

Rainer, this is all I could find for graphics of the sensors: http://www.nasa.gov/returntoflight/news/ECO_graphics.html

thanks - there were indeed some interesting diagrams. I also managed to magnify the sensor element with a somewhat reasonable quality. I just finished my write-up on the sensors. I found a report on STS-114's ECO sensor problem, and that was quite helpful to. Unfortunately, the write-up has become rather long (seem to be related to the subject ;)) I post it in case you or someone else would like to have a look. If you find something incorrect (can very well be), please let me know so that I can correct it.

Once again thanks for all your help. I really enjoy that!

I appreciated the diagram and your description, but I am a little confused by what you said about a dry tank failure. I thought the sensors were more concerned with the engines not cutting off if the propellant was gone, which would cause a seizure of the engines and most likely cause a catastrophic event to the vehicle. Your description is of the opposite scenario where the engines cut off too early during an ascent. Is the other scenario also a concern?