Endeavour to land on Friday at KSC!

Earlier this week, Discovery rolled over to the Vehicle Assembly Building. The space shuttle is scheduled to roll out to Launch Pad 39A on Aug. 3 and the STS-128 astronauts will perform dress rehearsal activities Aug. 5 to Aug. 7 at KSC. 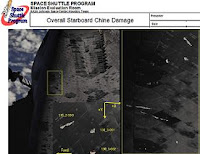 After much analysis and briefings, Endeavour's thermal protection system has been cleared for reentry! The right hand side of the orbiter did exhibit some damage due to the foam that shed during ascent. However, only one of these damages really needed further evaluation due to the depth. In reviewing all the the high resolution photos, we saw a very clean heat shield with the exception of the foam damages. So, our job is done and now we're back at Kennedy Space Center. :)
Posted by Damaris Sarria Toepel at 2:17 PM 6 comments:

Today marks the 40th anniversary of the first landing on the moon. On July 20, 1969, the human race accomplished its single greatest technological achievement of all time when a human first set foot on another celestial body.

Six hours after landing at 4:17 p.m. Eastern Daylight Time (with less than 30 seconds of fuel remaining), Neil A. Armstrong took the “Small Step” into our greater future when he stepped off the Lunar Module, named “Eagle,” onto the surface of the Moon, from which he could look up and see Earth in the heavens as no one had done before him.

He was shortly joined by “Buzz” Aldrin, and the two astronauts spent 21 hours on the lunar surface and returned 46 pounds of lunar rocks. After their historic walks on the Moon, they successfully docked with the Command Module “Columbia,” in which Michael Collins was patiently orbiting the cold but no longer lifeless Moon. 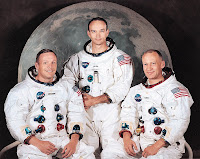 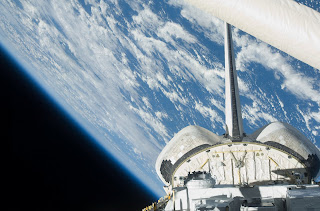 Late last night we finished the review images for any damage to Endeavour's heatshield. Aside from those damages that we detected during ascent, the vehicle was in pretty clean condition. Today there will be preparing charts and attend a series of meetings to discuss the damages we did find so they can be cleared for reentry. This involves putting charts together that include the dimensions, expected heating, etc. and a lot of discussion with the analysts.
Posted by Damaris Sarria Toepel at 9:27 AM 2 comments:

Today Endeavour will dock with the International Space Station (ISS). Prior to docking, the Orbiter will perform a rendezvous pitch maneuver which is basically a backflip that exposes its heat shield to the crew of the ISS astronauts to take high resolution photos of the Orbiter's heat shield for analysis by the team I am on.

We did detect some damage already due to the ascent video, but we will get a better look at these once the photos are downlinked from the ISS. 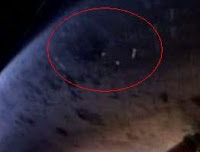 When the External Tank (ET) is jettisoned from the Endeavour, photos are also taken by the crew utilizing a handheld camera to take high-res images of the tank as it begins its descent. Here's a photo they were able to get of some foam missing from the ET. This could be the area from where foam the struck the Orbiter. However, based on what's been seen so far, it is unlikely the foam could have caused any serious damage to the tiles. We expect the damages to be minor cosmetic damage which usually only effects a small portion of the tile coating surface with not much depth to it. Watching the news after launch, I can say some over-exaggerate the issue and they make it sound a little frightening! 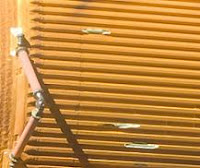 You can read a little more about today's activities and what's been going on at the following article: http://www.nasaspaceflight.com/2009/07/sts-127-endeavour-rpm-docking-tps-latest/
Posted by Damaris Sarria Toepel at 10:15 AM 3 comments:

After five delays ranging from hydrogen leaks to unfavorable weather, space shuttle Endeavour and her crew are finally on their way to the International Space Station. Here are some pictures I took while I watched launch from the press site near the countdown clock. 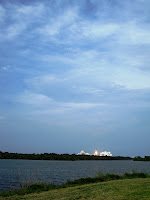 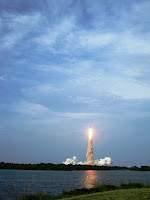 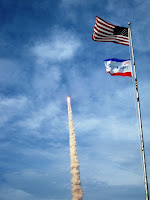 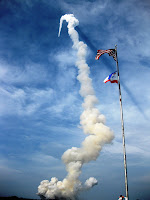 Before launch I had a very quick interview with Central Florida News 13 where I got to talk a little bit about the thermal protection system imagery review we will be assisting with at Johnson Space Center. My friend Nicole was able to get a portion of the interview while she was watching it on TV (Thanks Nicole!): 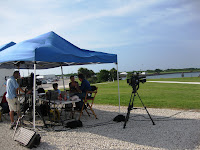 I was able to get a quick shot of our international partners from JAXA who came out to witness the final two components for the Kibo module successfully launch with Endeavour!! Did you know that Kibo means 'hope'? :) Check out pages 33 - 68 in the STS-127 press kit that offers some awesome insight on the payload and the new "porch" in space. :) http://www.nasa.gov/pdf/358018main_sts127_press_kit.pdf 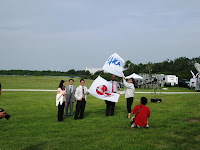 Post flight, there was some debris and damage was was detected along the right side of the wing. From looking at the damage, it looks very similar to what occurred during STS-125. But that's exactly where my team comes into play. Right before docking with the ISS, the ISS crew will take high-res photos for us to view the area clearly. We should also be able to see the damage with the orbiter boom sensor system by tomorrow as well. I'm off to pack now and get ready for a flight to Johnson Space Center tomorrow to help out with this.
Posted by Damaris Sarria Toepel at 9:48 PM 8 comments: 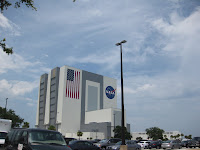 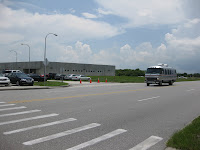 Weather is clearing up for us and the astronauts just passed by the building I work in to be on their way to the pad!
Posted by Damaris Sarria Toepel at 2:29 PM 13 comments: 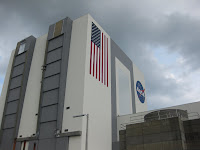 Well, even though it looks like this outside right now, weather forecasters are still optimistic that the sea breeze will push those clouds inland. Launch is still scheduled for 6:03 p.m EDT today.
Posted by Damaris Sarria Toepel at 1:23 PM 3 comments:

By delaying 48 hours to Wednesday, engineers will have time to repair a rocket thruster rain cover that has pulled loose slightly. However, slipping to Wednesday means the crew likely will have to give up one day of their space station construction mission to undock and get out of the way before the Russian Soyuz supply ship arrives.

The outlook for Thursday's 5:37 p.m. EDT launch time has a 40 percent chance of good weather.

Interview with Miles O'Brien and David Waters on spaceflightnow.com

Did you see it? I just finished my interview on spaceflightnow.com with Miles O'Brien and David Waters! 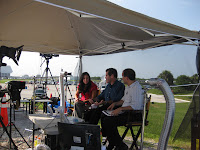 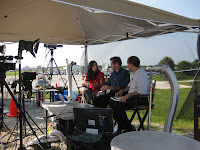 We have better weather today, with only 30% chance of showers or thunderstorms prohibiting launch.

Launch is set for 7:13pm EDT. I will still have a interview with spaceflightnow.com, but due to the slight launch delay, my interview will be a little earlier at 5:15pm EDT.
Posted by Damaris Sarria Toepel at 8:30 AM 4 comments: 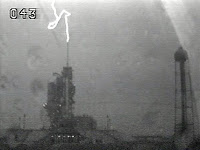 Endeavour's launch tomorrow will be at 7:13 p.m. EDT. Weather forecasters predict a 40 percent chance that weather will prevent a liftoff due to thunderstorms.
Posted by Damaris Sarria Toepel at 12:32 PM 4 comments:

Do You Think We'll Launch?

Join Miles O'Brien, David Waters and astronaut Leroy Chiao for our live webcast of Endeavour's launch on Saturday from Kennedy Space Center. The show starts at 3:00 pm EDT at http://spaceflightnow.com/shuttle/sts127/status.html. I will be interviewed by them at 5:45 pm EDT!!!!

Back from the West Coast!

Well, I'm back from my vacation from the West Coast and I had a great time. Below are just some highlights of my trip!

Big Four Ice Caves in Washington: The snow had not melted yet so the caves were not formed yet. 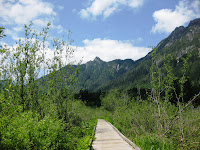 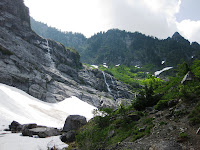 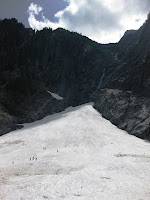 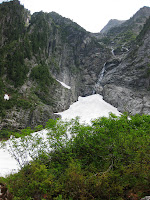 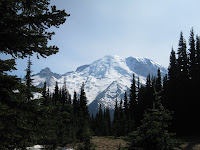 Bonneville Lock and Dam in Oregon: 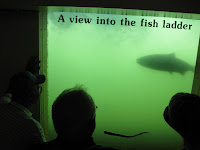 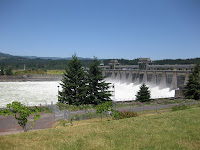 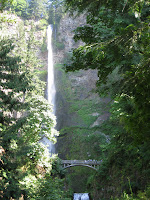 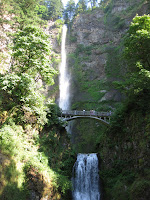 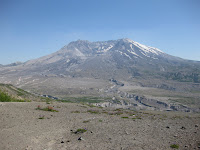 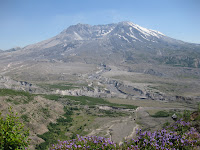 Even though I am on vacation, I still try to visit either a school, company, or organization to talk about the Space Shuttle. So this time I just visited my sister's company, Tetra Tech to give a briefing on the Orbiter's Thermal Protection System and mission turn-around process.

As for my vacation...We did a lot of hiking at Granite Falls and Mount Rainier National Park. We visited Ocean Shores and geesh was the water cold!! I have definitely become accustomed the to the warm Florida waters. :) The weather has been great here in Washington. Completely sunny and around the 70s. Tomorrow we head to Oregon for a couple of days. I was going to upload photos of the sites we've visited now that I finally got internet access, but I forgot the cord to download the pictures from the camera at the house. duh...


So here's a quick update on some space stuff while I've been away: