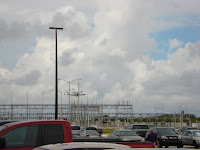 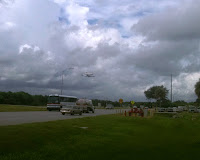 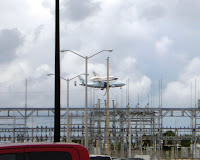 Discovery and the modified 747 will depart Edwards Air Force Base at 6:20 a.m. local time (9:20 a.m. EDT). The first refueling stop is planned at the Rick Husband International Airport in Amarillo, Texas. The second stop is for fuel is expected later in the day and NASA intends to have Discovery stop in Louisiana on Sunday for an overnight stay at Barksdale Air Force Base near Shreveport.

Arrival at Kennedy Space Center is targeted for 10:30 a.m. EDT on Monday.
Posted by Damaris Sarria Toepel at 4:54 PM No comments: 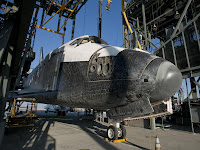 Discovery's cross-country piggyback ride atop a modified Boeing 747 jet from Edwards Air Force Base in California to Kennedy Space Center in Florida will begin Sunday. The exact time of departure has yet to be set because of changing weather conditions which will be assessed tomorrow. For the latest status about ferry flight, you can call 321-867-2525 or 661-276-2564.

Some blog readers asked how they could view a take off from Edwards AFB. The following was all I could find, so I hope this helps. Takeoff occurs from the main runway (Runway 04) toward the northeast, although a wind shift could mandate a change to Runway 22 to the southwest.

"The main base area of Edwards Air Force Base will not be open to the public for viewing of the shuttle's ferry flight takeoff. However, the 747-shuttle combination may be visible after a Runway 04 takeoff just north of the base in the Boron and North Edwards areas. The east lakeshore viewing site off Mercury Boulevard on the east side of Rogers Dry Lake will also be open to the public, although it is some distance from the takeoff point."
Posted by Damaris Sarria Toepel at 5:53 PM 1 comment: 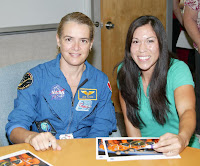 The STS-127 crew came to visit Kennedy Space Center and talk about their experience during their mission. They thanked everyone for their hard work on the hardware and processing that made the mission possible. Below is a photo I got to take with CSA Astronaut Julie Payette. She’s waaaayy cool. 
Posted by Damaris Sarria Toepel at 11:19 AM 4 comments: 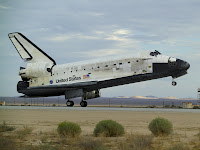 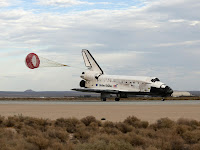 Discovery landed at Edwards Air Force Base in California. Touchdown occurred at 8:53 p.m. EDT. I'm glad the STS-128 crew made it home safely! To get Discovery back to Kennedy Space Center, a ferry flight atop a 747 carrier jet will occur in about a week. Given the heavy weight of the orbiter with the Leonardo module in its payload bay, four refueling stops and at least one overnight stop are planned.
Posted by Damaris Sarria Toepel at 8:53 PM 3 comments:

Discovery to land in California tonight!

We will not be landing at Kennedy Space Center today due to unfavorable weather conditions. Instead...we're California bound!! The deorbit burn is scheduled for 7:47:37 p.m. EDT, leading to touchdown at 8:53:34 p.m. EDT on Runway 22.
Posted by Damaris Sarria Toepel at 4:19 PM No comments:

UPDATE: No Landing for today! Thanks a lot, rain clouds. Tomorrow's weather doesn't look so great either, but they'll still give it a try. The next landing opportunity for tomorrow will start with a deorbit burn at approximately 4:45 p.m. and touchdown at 5:48 p.m. EDT. There would be another chance to get into KSC on the next orbit too (6:21pm deorbit burn and 7:23pm landing), followed by two shots to the backup site at Edwards Air Force Base in California. At this point, the formal decision to call up Edwards' support on Friday has not yet been made.

UPDATE: Unstable weather conditions at the Kennedy Space Center have left no choice but to scrub today's first landing opportunity. Discovery will remain in space for one more orbit and target a 7:35 p.m. EDT deorbit burn and a nighttime touchdown at 8:40 p.m. EDT.

Discovery will attempt to land at Kennedy Space Center today. The first landing attempt is at 7:05 p.m. EDT and the second at 8:42 p.m. EDT. There are no technical issues with Discovery, but weather forecasters are predicting rain showers and possible thunderstorms in the area that could cause problems for a landing today or tomorrow. There is always Edwards Air Force Base in California as an option for landing, which shows acceptable weather for several days in a row. However, hopefully the weather will cooperate for a landing at Kennedy Space Center today!
Posted by Damaris Sarria Toepel at 7:46 AM 2 comments: 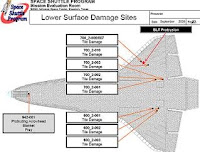 Discovery's Thermal Protection System (TPS) is acceptable for reentry. On Wednesday, the group presented the Mission Management Team (MMT) with all of the completed analysis for the 13 damage sites that were detected. There are no concerns for TPS during entry!!
Posted by Damaris Sarria Toepel at 10:37 AM 2 comments: