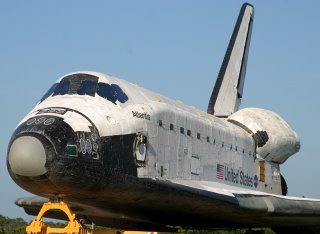 I've been really busy lately. I am going through finals, wrapping up one research paper only to start another, and turning in projects. Aside from school Space Shuttle Atlantis rolled over to the Vehicle Assembly Building. This will be our continuation flight in assembling the International Space Station. Atlantis is going to carry the second set of solar arrays to attach to the ISS. The last solar arrays were in place in 2000, so it's been a while.
Posted by Damaris Sarria Toepel at 10:49 PM 2 comments:

This was the first time I've ever heard the sonic boom. It was amazing! Our friends are home! 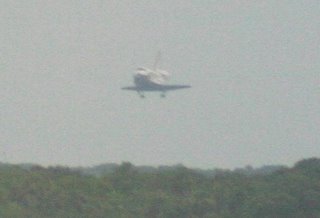 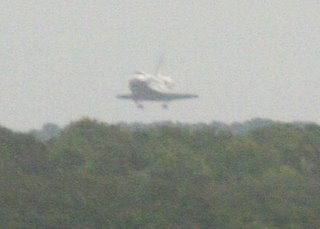 Posted by Damaris Sarria Toepel at 9:53 AM 8 comments: 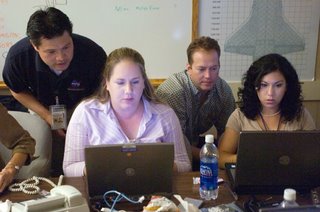 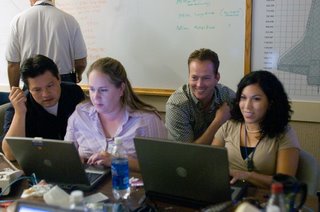 While the astronauts are doing their spacewalk, I am helping to quickly prepare the briefing charts to include analysis and recommendations.
Posted by Damaris Sarria Toepel at 12:50 PM 1 comment: 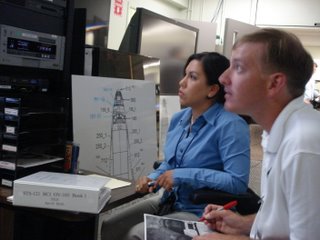 Here's a picture someone took of my co-worker and I while we were looking at the imagery files downlinked from the space station. I just got home and I am exhausted!! If you watch the NASA channel, they are showing the highlights of flight day 4. There are briefings that they're showing from the press release which was exactly what i helped prepare today. We had the crew take better images of the areas we had marked down as damages. There are still some areas that we are evaluating for heating scenarios, some were eliminated or acceptable by criteria; for example, the nose cap. There was a white spot on the nose cap that was thought to be a damage. However, with a better image from the crew today, it was determined it was a bird dropping. Yup. We're all glad it is not a damage. Tomorrow is saturday and I will be at work at 7am to continue to help working on charts with the results of the analysis/recommendations.
Posted by Damaris Sarria Toepel at 12:00 AM 4 comments:

Today, with the imagery team, we looked at images downlinked from the space station. There were a couple thermal blankets that had a small tear. However, this is not something that is a threat to the re-entry of the vehicle. There was a small damage in between the commander and pilot's window. Again, the damage is small and is not a threat.

I am extremley impressed as to how "clean" the tiles were. There were damages, but not of them fell out of the criteria we have for size in specific zones of the orbiter. We did have a couple of protruding gap fillers that are undergoing analysis at the moment. The analysis is to be done by the aeroheating group to see what the effects are on the boundary layer. So if the analysis shows it will be a threat upon re-entry, managers will need to decide if an EVA is required to pull the gap filler on a spacewalk, just as in the last flight (STS-114). Today was a long day. I went in at 8:30am and didn't get out till about 8:00pm. And this is that I left early because I have a paper for school that I want to work on. However, there were others that have been there longer, and stayed there longer today. Tomorrow will be an even longer day as meetings will be held and charts for briefings will need to be prepared based on the analysis for these in-flight anomalies. I go in at 7am and i may be working more than 12 hrs tomorrow.

It was a great day though. I have got to say that being part of the mission is the biggest pay-off in my job. I couldn't ask for anything better. I am surrounded by great co-workers and they are all team-players. I was watching the NASA tv downlink and waited for the orbiter to dock to the space station. when it did, it was so great to see the crew come to the space station. My biggest fan right now is Mike Fossum (also a graduate from Texas A&M University!!!). It's his first flight and he just has the biggest smile on him all the time. But it was just so cool how i was just sitting there at work, watching the astronauts downlink the images, and then an hour later, i am looking at them for damages. It's all amazing to me and just makes me want to hop on the next shuttle (Haha...too bad it's not that easy to do)!!


If you want to see pictures of the damages, you can visit this site: http://www.nasaspaceflight.com/content/cat.asp?cid=4
Posted by Damaris Sarria Toepel at 9:57 PM No comments:

I'm in Houston now. It's late and I should be in bed because I have a long day ahead of me tomorrow. I will be looking at the imagery downlink images that the space station crew will be taking of the orbiter's belly. We will look for any damages or discrepancies on tiles, blankets, or regarding gap fillers. I'll update everyone more later. I just checked in to my hotel and need to iron (yuck..not a fan of ironing..)

-Damaris
Posted by Damaris Sarria Toepel at 12:39 AM 2 comments:

We have ACCEPTABLE launch conditions. "Go" for STS-121!!!

We are go for launch everyone!!! Here are some pictures of the foam that was evaluated. A borescope was used to inspect the crack and they have evaluated and run further analysis to determine that we can proceed with the launch tomorrow! (yey!) 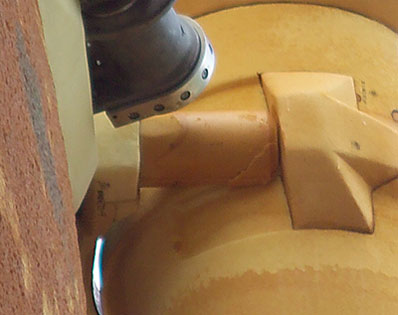 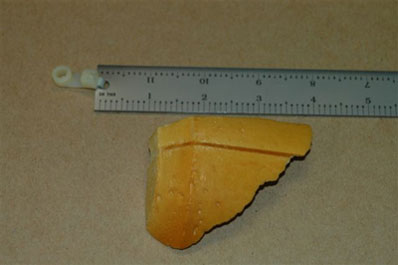 I did want to mention this: NASA has public phone numbers in the case that if you're unable to listen to NASA TV when they have the press conferences even during the launch countdown, these lines are available at "monitor only". you can call it and just listen in. Its exactly whats being said during on the television. Now there isn't something being said every minute, so if you don't hear something then try back because they may just have the cameras on the shuttle and not be saying anything. 321/867-1220, 321/867-1240, or 321/867-1260

Almost forgot to share some pictures of discovery on the launch pad!!!! Enjoy! 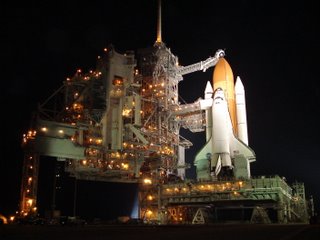 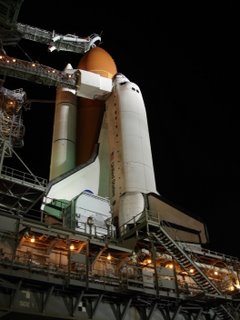 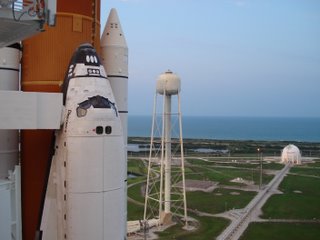 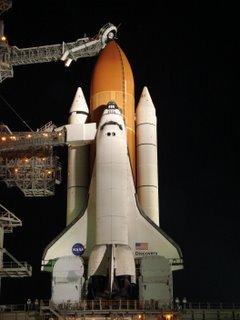 Even tomorrow's launch may not happen.

Yesterday after the scrub, there is an inspecting crew that inspected the external tank for ice buildup and looked for any cracks or missing foam. Well, a crack was found. It's in discussion right now, whether it needs to be repaired and what the options are. The crack was found on the foam insulation near one of the holding brackets that hold the oxygen feed line. It's about 4-5 inches in length.

Posted by Damaris Sarria Toepel at 11:25 AM 4 comments:

Someone do a rain dance to make these clouds go away! haha. Well, we are going to attempt another launch on Tuesday because tomorrow's predicted weather forecasts a 60% chance of unacceptable launch conditions.
-Damaris
Posted by Damaris Sarria Toepel at 1:32 PM 1 comment:

Today i had to provide engineering support so i was at work early enough to beat the traffic of everyone coming to view the launch. However, due to weather and then a boat being in restricted area, the launch did not happen. At work we really though the shuttle was going to take off today because there were absolutely no clouds over the shuttle and on the coast side...but there were some heavy clouds inland. There cannot be heavy clouds within a 25 mile radius of the launch site. Not only is it for visibility, but it is also incase something goes wrong and an abort mode, such as the Return to Launch Site (RTLS) is approved. This is a very dangerous abort mode.

But guess what?! I did get to see Vice President Dick Cheney. While we were working, he was given a quick mini-tour of the obiter processing facility. There were secret service guys all over the place and security was very tight.

Well tomorrow i will be back at work and wait to see if we launch at 3:26 pm. I've been watching the weather channel and it says we're going to have afternoon showers. We'll see, but keep your fingers crossed!! :)
Posted by Damaris Sarria Toepel at 12:58 AM 1 comment:

The tank is filled and the crew will arrive in 3 hrs!!!

Here's the time for those who can't be here to see it, to start refreshing this page about every couple minutes, hours....to see up-to-date news. Especially when it gets closer to the final countdown...

Click here for Mission Status!!
Posted by Damaris Sarria Toepel at 9:25 AM 3 comments: