This Week In Space 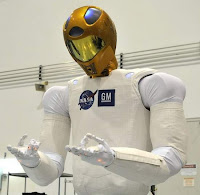 Rosie from the Jetson's comes true! Just kidding! NASA and GE have been working on jointly on this robot, Robonaut 2 or R2, which consists of a white-suited torso with two arms, two five-fingered hands and a gold head. The robot's role in space initially will be to perform tasks serving as an "astronaut's assistant" from a fixed position inside the U.S. Destiny lab. Eventually, upgrades could have this robot performing spacewalks!

R2 has a very human-like design for the purpose of being able to use human tools as well. The robot will fly on Discovery's 11-day mission's scheduled for November 1, 2010 at 4:40pm.
Posted by Damaris Sarria Toepel at 8:53 AM 1 comment: