Headed to the West Coast :) 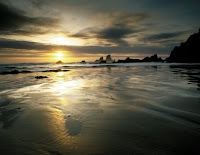 I will be a little idle from space-blogging for about a week. I’m headed to the West Coast to meet up with my family. We’re going to drive along the coast of Washington and Oregon. I’m very excited!! We’re going to get some hiking in, visit waterfalls, and caves….it’s going to be an awesome time. When I was younger, my dad used to take my sister and I camping to Yosemite. With everyone in different states, the logistics of a Yosemite trip was a little more difficult. So we’re starting off in Washington where my sister lives and we’re taking her kids along with us.

I’ll try to post some pictures during the trip if I get access along the way. Be back to space-blogging in about a week. :)
Posted by Damaris Sarria Toepel at 2:21 PM 7 comments: 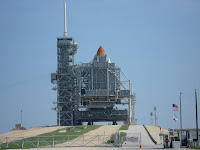 Endeavour still sits on the pad in the Florida heat as engineers and technicians work on addressing the leak during tanking of the External Tank (ET).

Next Wednesday, a full-up tanking test of Endeavour’s External Tank will be performed to test a potential solution to the leaking Ground Umbilical Carrier Plate (GUCP). The leading candidate for the cause of the leaks is believed to be related to the External Tank Carrier Assembly (ETCA) mounts. I’m pretty optimistic the tanking will go well and the fix will be successful. 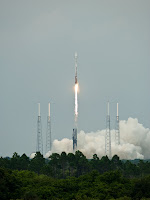 LRO/LCROSS Launch: Weather is a concern

Now 60 minutes from liftoff. Fueling of the Atlas V rocket with cryogenic liquid oxygen and liquid hydrogen is proceeding as planned and activities remain on schedule for a liftoff at 5:12 p.m. EDT. Local thunderstorms are the only concern right now.

If the weather or a technical problem prevents an on-time launch at 5:12 p.m. EDT, there are two later opportunities available at 5:22 and 5:32 p.m. EDT.
Posted by Damaris Sarria Toepel at 4:12 PM No comments:

Tomorrow, an Atlas V rocket will launch a payload comprised of NASA's Lunar Reconnaissance Orbiter (LRO) and the Lunar Crater Observation and Sensing Satellite (LCROSS). Together, the two independent projects represent NASA's first steps in its eventual plans to return humans to the Moon.

The LRO will be released from the launcher 46 minutes after liftoff, embarking on a mission to survey the Moon's terrain, map its natural resources and measure the radiation threats in preparation for the next human expeditions. The spacecraft should reach the Moon in four days, then use its onboard engines to enter lunar orbit.

The LCROSS will confirm the presence or absence of water ice in a permanently shadowed crater at the Moon’s South Pole. The identification of water is very important to the future of human activities on the Moon. Two heavy impactors will test the theory that ancient ice lies buried there. The impact will eject material from the crater’s surface to create a plume that specialized instruments will be able to analyze for the presence of water (ice and vapor), hydrocarbons and hydrated materials.

About an hour away from the end of fuel tanking, a hydrogen leak at the umbilical was detected again. The launch team is draining the cryogenic propellants from the shuttle's external fuel tank and by tomorrow evening work should commence on fixing the ground umbilical carrier plate.

The next attempt at launching space shuttle Endeavour will be on July 11 at 7:39 p.m. EDT.
Posted by Damaris Sarria Toepel at 3:17 AM 1 comment:

We're still awaiting the final "go" from the Mission Management Team to start with fueling Space Shuttle Endeavour. Fueling has been delayed because of weather conditions here around KSC.

I'm headed to bed early tonight so I can make it into work really early to watch the launch. Launch is still scheduled for 5:40 a.m. EDT.
Posted by Damaris Sarria Toepel at 7:44 PM No comments:

Next Launch Attempt for Endeavour

Space shuttle Endeavour will bump its way into the Cape Canaveral launch lineup and target a 5:40 a.m. EDT liftoff Wednesday, NASA officials decided today. That means the Atlas 5 rocket originally scheduled to launch at that day carrying two Moon-bound science satellites will be pushed back.

Both launches face Saturday deadlines due to the lunar launch window closing and thermal constraints on Endeavour's orbit with the space station.

NASA will hold a news conference from the Kennedy Space Center at 3 p.m. EDT today.
Posted by Damaris Sarria Toepel at 1:30 PM 4 comments:

Stowed upon Space Shuttle Endeavor is one of many experiments that I actually had some part in.

While I was in Barcelona, Spain last summer attending the International Space University, we worked with Canadian Space Agency, Astronaut Robert Thirsk (far left in the photo) on an experiment that will be taken up to the International Space Station by the crew of Space Shuttle Endeavor. Dr. Thirsk already made it to the ISS on a Soyuz late last month along with ESA Astronaut Franke De Winne and Cosmonaut Roman Romanenko. They are part of the ISS Expedition 20/21.

The experiment is called IRIS, which stands for Image Reversal In Space, and is an educational payload that was designed, tested, implemented, and analyzed entirely by students of the International Space University. IRIS will investigate whether the perception of three-dimensional ambiguous figures is affected when the observer is in a reduced gravity environment.

If you’ve ever wondered what experiments the astronauts will do once they dock to the ISS or what they’re taking up there…you definitely have to check out the STS-127 press kit. http://www.nasa.gov/pdf/358018main_sts127_press_kit.pdf. IRIS is mentioned on page 92 of .pdf file.

Only 2 days til launch and now there is only a 10% chance of weather prohibiting launch!!!
Posted by Damaris Sarria Toepel at 8:56 AM 14 comments:

Endeavour to Launch on Saturday! 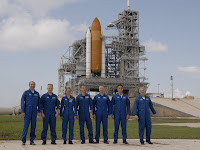 The goals of the 16-day are to deliver and attach the Kibo Japanese Experiment Module Exposed Facility and Experiment Logistics Module Exposed Section. The facility will provide a type of "front porch" for experiments in the exposed environment, and a robotic arm that will be attached to the Kibo Pressurized Module and used to position experiments outside the station. The mission will include five spacewalks. Other milestones include to replacing aging solar array batteries, delivering critical spare parts, and to ferry Astronaut Tim Kopra to ISS and replace him by bringing home Japanese Astronaut Koichi Wakata.
Posted by Damaris Sarria Toepel at 11:32 PM 1 comment: 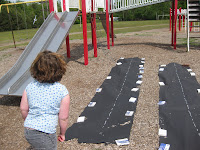 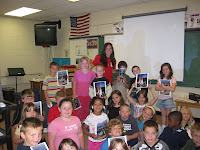 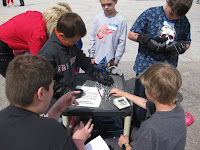 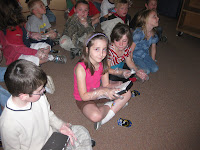 My second day at Sparlingville Elementary consisted of giving more presentations to the classes, but the coolest thing was when I walked outside to see the different "space stations" that were set up with different space-related projects for the kids to work on and rotate around. The kids were thrilled to work on the projects and learned so much about space.

I had fun visiting the school and I loved to see that the students were so engaged in my presentation. :)
Posted by Damaris Sarria Toepel at 11:02 PM 2 comments: 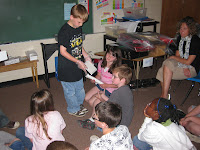 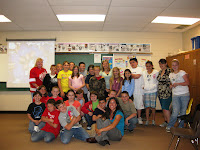 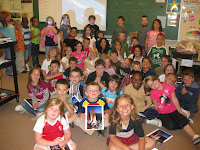 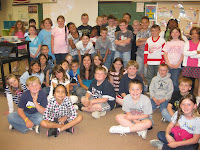 I loved today! The students were attentive and enjoyed the presentation. They asked some awesome questions and were so excited to be able to see actual orbiter tiles and blankets. I presented to 7 classes today and tomorrow will be Space Day for the 4th graders. I'll also be talking to the 2nd and other kindergarten class.

For Space Day tomorrow, the teachers have set up 11 different "space stations" for the kids with different projects and they're broken up in three groups (Discovery, Atlantis, and Endeavour). I have 5 presentations to give tomorrow and then I'll be on my way back to Florida! :)

By the way....Atlantis has made it back to Florida! 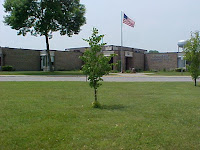 Atlantis left Edwards Air Force Base just in time for me to catch a flight to Michigan. On Wednesday, Sparlingville Elementary School in Kimball, MI. will be having a giant Space Day for all their students. I will be the guest speaker talking about the space shuttle and the fun things I get to do. We've broken the school presentations up in two days so I will be talking to some grades tomorrow and then also on Wednesday! The students have a lot of fun projects and events set up. I try to speak to schools that don't have a NASA center nearby so I'm extra excited about talking to the students tomorrow. Probably what I enjoy the most is experiencing the students' reaction and their questions on the presentation.
Posted by Damaris Sarria Toepel at 11:40 PM 1 comment:

...and the Shuttle Carrier Aircraft Takes Off!

The Shuttle Carrier Aircraft departed from Runway 22 at Edwards Air Force Base.

Due to weather, Atlantis will make a stop in El Paso, Texas and stay their overnight at the Biggs Army Airfield.
Posted by Damaris Sarria Toepel at 11:06 AM 2 comments:

Takeoff of the shuttle carrier aircraft has been targeted for approximately 8 a.m. local time (11 a.m. EDT) today. We're running a little behind schedule due to some difficulties in trying to tighten a bolt on the right attach point for connecting Atlantis to the modified Boeing 747 aircraft. Everything is good now, and Atlantis should be on her way back to KSC soon.

Here's a look inside the modified 747 aircraft that ferries Atlantis back to Kennedy Space Center. 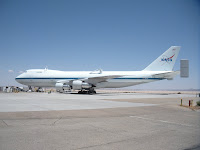 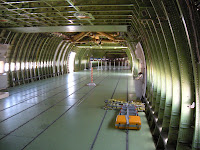 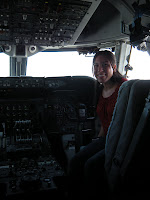 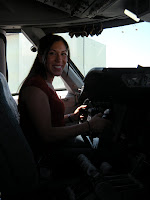 Posted by Damaris Sarria Toepel at 9:13 AM 4 comments: