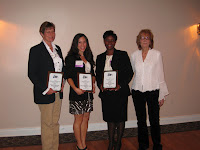 Yesterday I attended the Space Coast's Society of Women Engineers Awards Banquet. I was nominated for the Distinguish New Woman Engineer award. We had guest speaker Dr. Cammy R. Abernathy (Dean, College of Engineering of University of Florida and Professor of Materials Science and Engineering) who gave a great insight about the economic shift in society that has effected the engineering disciplines within universities and industry.

I was selected to receive the award in the category I was nominated for. It was a great honor accepting this award last night and being surrounded by so many women who embrace leadership and give back to their community. I have had great support and encouragement from my mentors who have helped shape me professionally throughout my career. One thing I have learned for sure is that you can never have too many mentors. I learn a variety of qualities from the different people I look up to.

The ceremony was fantastic and I was amazed in the technical leadership of all the nominees. Below are the names of all the honorees that were recognized last night.

Endeavour is back, and Discovery is in the VAB

What a day! Preps continue in getting Endeavour back to processing for its next flight (STS-134, November 2010)....and Discovery rolled over to the VAB!!!

This Week in Space

The International Space Station gets a room with a view like no other - many wish NASA had as clear a view of what is next in space. "This Week in Space" talks to the exiled president of the "Constellation Nation" – former NASA boss Mike Griffin – who equates the Obama decision to Richard Nixon's cancellation of Apollo – only worse. And we hear from a leading space entrepreneur – Eric Anderson of Space Adventures - who says the Obama plan is "brilliant... a masterstroke of U.S. space policy."
Posted by Damaris Sarria Toepel at 6:35 PM 1 comment:

Although the skies don't look too bad right now at the Kennedy Space Center, the weather forecast for landing time continues to call for low cloud ceilings and showers in the area.

A final decision whether to land on time will come around 9 p.m., leading to ignition of Endeavour's braking rockets at 9:14:52 p.m. for 2 minutes and 38 seconds to start the trek home. The shuttle would hit the upper atmosphere at 9:49 p.m.

If the weather or a problem forces entry flight director Norm Knight to scrub the day's first re-entry opportunity and keep Endeavour in space, there is a backup landing option available one orbit later. That would begin with a deorbit engine firing at 10:50:52 p.m. and a touchdown in Florida at 11:55:50 p.m. EST.

NASA is calling up support from the alternate landing site at Edwards Air Force Base in the Mojave Desert of California. So if the weather prevents a landing in Florida, the spacecraft could be diverted there. The first deorbit opportunity will be 12:20:31 a.m. EST and landing on the temporary Runway 22R at 1:25:41 a.m. EST. A second shot into Edwards would come an orbit later.

However, weather forecasters are calling for the chance of low clouds and rain showers at both landing sites tonight. :(

UPDATE: GO FOR THE DEORBIT BURN! Weather conditions at the Kennedy Space Center are going to cooperate for the space shuttle landing this evening, allowing entry flight director Norm Knight in Mission Control to give final approval for Endeavour to perform the deorbit burn at 9:14:47 p.m. EST that will commit the spacecraft for the journey back to Earth.

Some Awesome Shots from STS-130

Posted by Damaris Sarria Toepel at 10:06 AM 3 comments:

Lots happening here in the space world. Endeavour is scheduled to return to KSC on Sunday night at 10:25 EST. I haven’t seen a definite weather briefing, but low ceiling clouds may pose a threat to landing at KSC. The weather at Edwards Air Force base in CA. is not favorable on Sunday, but great for Monday. So…we’ll see as it gets closer to the de-orbit burn on Sunday. The hatch closure will occur today at 2:49pm and Endeavour will undock from the ISS at 7:58pm.

Discovery’s launch date has changed to April 5th at 6:27am! Roll over from the OPF will occur on Monday (weather permitting). There will be a 10 day window for this launch.

We’re busily processing Atlantis for its next launch as well. It will be rolling out of the OPF to the VAB on April 8th, rolling out to the launch pad on April 20th, and with a targeted launch date of May 14th.
Posted by Damaris Sarria Toepel at 10:00 AM No comments: 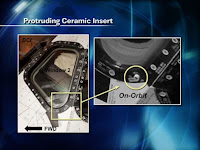 We've completed the inspection of the orbiter's imagery and found 2 areas of interest. The first issue we found was a loose ceramic insert around a fastener securing a carrier plate around one of the shuttle's cockpit windows. The fastener is protruding a bit above the surface of the window frame, as shown above. Currently, we're assessing the effects of this insert as debris transport if it were to loosen completely during reentry.

Another area of interest is a repaired tile on the upper surface of the crew module. The repair appears to have degraded and one corner of the tile is slightly protruding higher than the rest of the tile. 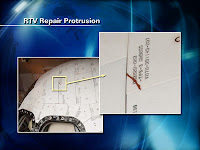 Neither issue appears to be a serious threat, but we do need to complete the analysis from a debris transport view and present it to the Mission Management Team.

Overall, Endeavour's surfaces looked very clean. We didn't have to log in any tile damages as none were out of criteria. The orbiter is very clean from a thermal protection standpoint. :)
Posted by Damaris Sarria Toepel at 11:29 AM No comments:

Endeavour will dock with the International Space Station at 12:06 am EST.

Today the Orbiter Boom Sensor System (OBSS) was used in inspecting Endeavour's heat shield. The initial inspection sweeps using the boom have been completed by the crew. Here at Johnson Space Center, we're reviewing the data to be able to declare the heat shield safe for re-entry.

Before docking with the International Space Station, high resolution photos will be taken of the orbiter by the ISS crew and the team I'm on will begin to inspect the imagery. I'm on a overnight shift so I'm just going into work now!
Posted by Damaris Sarria Toepel at 7:10 PM No comments:

Such a beautiful launch early this morning at 4:14 a.m. EST!!! As the crew of space Shuttle Endeavour is on their way to the International Space Station, I'm on my way to Houston for imagery inspection operations for the Thermal Protection System of the orbiter. Watching a launch feels so rewarding. :)
Posted by Damaris Sarria Toepel at 8:22 AM No comments:

The countdown has officially started for Sunday’s STS-130 launch of Space Shuttle Endeavour. Sunday’s (Feb. 7th) launch is scheduled for 4:39 a.m. EST and there is a 70% favorable weather conditions for lift off!!!!
Posted by Damaris Sarria Toepel at 11:20 AM No comments:

So where is our Space Program headed?

Earlier this week, President Obama stated NASA’s proposed budget for the fiscal year. Starting Oct. 1 the budget seeks to cancel the current Constellation program intended to send astronauts into orbit and to the Moon. The other major change in Obama's space policy calls for $6 billion to be spent to help private companies develop rockets and crew capsules to carry astronauts to the ISS.

NASA's work on the Constellation Program, including the Ares 1 and Ares V and Orion, will continue this year while Congress examines the proposed changes. We’re all looking very forward to the thorough evaluation that will be performed by Congress of the budgetary framework President Obama has proposed to ensure NASA can sustain a robust and balanced space program of human spaceflight, climate, science, robotics and aeronautics.

So what’s new with me? Well since I was hired under the Space Shuttle Program contract, the retirement of the shuttle fleet does effect me. My plan? To find another position that will advance my career. Our option here is to continue with our position until the end of the program (or until layoffs effect us) or….there may be other opportunities that may come to KSC that we could apply for.

There is also uncertainty over the future of the astronaut corps. Space agency officials declined Tuesday to confirm if NASA's astronaut corps would continue after the space shuttle retires within the year. I have been asked by many how this effects me and if I will continue to aspire to become an astronaut. Of course I will still apply to become an astronaut if the opportunity is there! At the moment I am focusing on my current job responsibilities, looking for what direction I want to take my career next, and continue in advancing my education. I’ve been very involved with volunteering my time to encourage math, science, and technology to students through the Society of Women Engineers and through some school visits. I fully intend to continue being very active in the community wherever my next venture takes me!
Posted by Damaris Sarria Toepel at 11:17 AM 8 comments: