The talk will be in support of Vibes & Waves in Action, a K-12 education project that involves a cross-disciplinary network of researchers in the Colleges of Engineering, Education and Arts & Sciences at the University of Massachusetts Lowell and high-school teachers and students in the school districts of Lowell and Lawrence, Massachusetts. 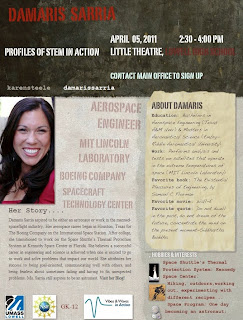 Posted by Damaris Sarria Toepel at 8:06 AM No comments:

Did you get to see the Supermoon!?!?!

The largest full moon in more than 18 years – a so-called "supermoon" – did not disappoint eager skywatchers around the world Saturday when it rose, big and bright, into Earth's night sky.

The full moon of March was 221,565 miles (356,575 kilometers) on Saturday, March 19 just 50 minutes after it hit its full phase, making it the biggest and brightest full moon since 1993. The "supermoon" phenomenon occurred because the moon was in its full phase and just 50 minutes past perigee – the point of its orbit that brings it closer to Earth.

Below are some shots by some photographers that capture the beauty of the full moon. Check out more images at http://www.space.com/11178-supermoon-photos-2011-skywatcher-images.html 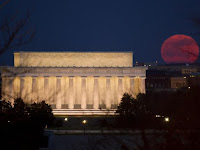 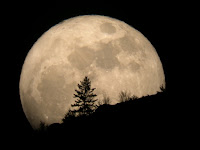 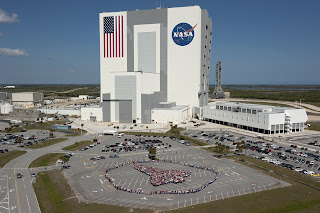 A unique photo was taken designed to honor the space shuttle program's 30-year legacy and the people who contribute to safely processing, launching and landing the vehicle.
Posted by Damaris Sarria Toepel at 3:00 PM 1 comment:

A Time of Mixed Emotions at Kennedy Space Center

Discovery landed last week ending not only a 13-day mission, but a 27-year spaceflight career. Preparations are now in work to retire the orbiter which will eventually be placed on public display in a museum.

Endeavour now sits on the launch pad awaiting a launch for April 19. On Monday, an accident involving in the death of James D. Vanover occured from the launch pad during preparations of Endeavour. The incident is being investigated it was a very sad day at Kennedy Space Center. This will be the final mission for Endeavour and it has been confirmed that the commander will still be Mark Kelly, husband of congresswoman Gabrielle Giffords.

Since last summer I was actively planning an outreach event for girls in grades 6-8. Together with the MIT Lincoln Laboratory and the Society of Women Engineers in Boston, we hosted a full day of engineering workshops to engage and encourage these young girls in the fields of math, science, and engineering. After the students checked in, they were directed to tables with all sorts of different donated hardware such as Rock Band guitars, printers, computers, old cell phones, etc. The girls were given screwdrivers and allowed to take any item apart to explore its technology. Best of all, they didn't have to put it back together!! Throughout the day, group rotated in 4 workshops: Robotics, Solar Energy Car, Electrical Circuit, and Lip Gloss mixing. Each workshop was hands on and the girls got to leave with what they built during the activity. During lunch, we had a Liquid Nitrogen demonstration where the girls had the opportunity to smash pennies, flowers, and marshmallows that were dipped in liquid nitrogen. The event was such a success, that we're planning the next one for this July!!!
Posted by Damaris Sarria Toepel at 4:59 PM 1 comment: