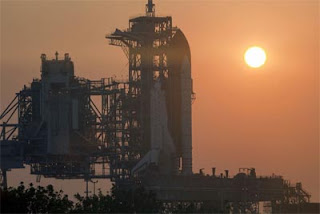 It really hasn't hit me yet that this is the last space shuttle mission. I am sure that if I still worked out at Kennedy Space Center, I would most definitely have that eerie feeling as the co-workers you worked with for so long start taking different paths and the workload starts decreasing. You don't realize how much of the country is in the dark about spaceflight until you're not in states like Florida or Texas where shuttle missions and spaceflight are always in the news.

Space Shuttle Atlantis is the shuttle that I worked on the most as a lead for the Thermal Protection System. I worked with an amazing team, learned so much, and am grateful to have worked on what has always been a key part to the United States history, spaceflight. Hopefully we will establish a path forward to continue our spaceflight exploration efforts.

Even though there is a high chance of rain in the forecast for tomorrow (70%), NASA is pressing along with flight preparations. If all goes as planned, The last shuttle flight will take off tomorrow from Kennedy Space Center at 11:26am EDT.
Posted by Damaris Sarria Toepel at 8:14 AM 4 comments: