Atlantis Arrives at Pad 39A for STS-125 Preparations 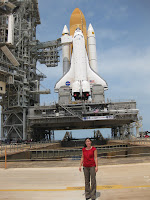 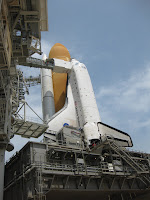 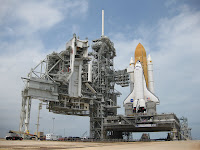 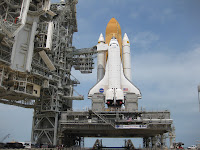 We're finally back at the pad ready to launch Atlantis again! Originally, the launch was delayed because of a technical issue with the Hubble Space Telescope and then it was adjusted in the timeline with another orbiter as a "launch on need".

What makes this mission unique? The Hubble Space Telescope is in a different orbit than the International Space Station. The astronauts onboard Atlantis cannot seek safe haven to the ISS if a major problem develops that might prevent a safe re-entry. As a result, space shuttle Endeavour will be moved to launch pad 39B on April 17 to serve as an emergency rescue mission, if needed.

If the mission goes as planned and we have no emergency, then Endeavour will be moved to pad 39A after Atlantis lands for normal processing and launch around June 13 to the International Space Station.
Posted by Damaris Sarria Toepel at 10:30 PM

This article has been added to the Astronomy Link List.