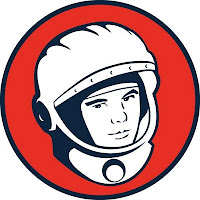 Everyone can participate, so find a celebration in your area! This year, Yuri’s Night celebrations will be held from April 4th-12th.

Tomorrow morning I will participate in a Yuri's Night event by running in a 5K "Space Race" on Cocoa Beach!
Posted by Damaris Sarria Toepel at 2:21 PM