Space Shuttle Discovery at the pad!

I've been working on a paper for school and I'm almost complete! My paper is on the available on-orbit repair methods, how they came about, and the applicability for each one.

Space shuttle Discovery arrived at Launch Pad 39A this afternoon (by ~1:15 p.m.). The shuttle began its slow 3.4-mile journey from the VAB to the pad on top of the crawler transporter at 6:47 a.m. 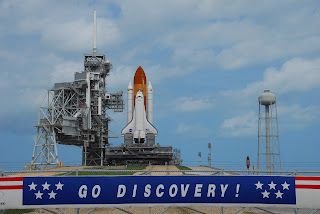 Something you'd want to check out is http://www.worldspaceexpo.com/. World Space Expo will be coming to Kennedy Space Center on November 1 - 4, 2007. It's going to be an awesome event that will be celebrating our 50 years in space. Check out the website and try to make it out to this event as a lot of great participants will be there! Next week I will start contributing to the team that is making this event even possible! So expect updates!!

I won't be supporting mission imagery for the next mission (STS-120), but next week I will be traveling to Houston for an imagery simulation for the LESS/RCC group. During Atlantis's STS-122 mission, I will be in Houston supporting imagery inspections of the wing leading edge, nose cap, and the foward External Tank attachment point. The simulation will get me aquainted with the procedures of documenting anything we find that is different from pre-flight images. What we look for during every mission are damages/discrepancies that could potentially effect the Thermal Protection System. Below is an example of an image that was downlinked during STS-121. Now what you see here in this picture is not a damage, but bird poop that was very noticeable. :) (Bird poop burns up during re-entry) 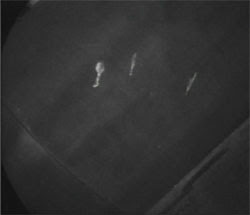 nice site and I which you good look with becoming an astronaut.

I am a bit less ambitioned - I just would like to view a launch ;) Maybe my space shuttle launch viewing blog is of interest for you. I'd love to get some comments from a potential astronaut ;)

I have also news on the issue with Discovery's heat shield, so it may even be an interesting read (though the issue itself is very saddening...).

Keep up the good work,
Rainer

Ohh... I forgot - do you even work on the TPS problem or get a chance to participate in it? I'd really like to hear some first-hand news. This is so exciting...