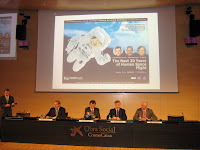 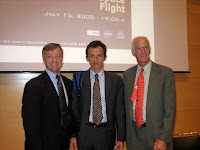 Weekly, the students of ISU attend panels which include some distinguished guests from different countries and backgrounds on some pretty interesting topics. Last week we attended a panel which was about Europe and where they are with Space. Being so tied in with NASA and their direction on spaceflight, it was great to hear the European Space Agency initiatives. Last night, I attended a panel in which the audience had an interactive discussion with ESA Astronaut Pedro Duque from Spain, CSA Astronaut Robert Thirsk, and former US Astronaut Jeff Hoffman. The panel was on the next 20 years of human spaceflight. Some great questions were asked by the audience and I threw one in there too!

So this brings me to my next topic! On top of our lectures we had to provide a 1st, 2nd, and 3rd choice of some advanced electives. Today we found out what elective we were assigned to and I was assigned to one titled ISS Educational Activity. I only knew a little bit about the elective before I went into it, but I am more than excited now!! So here's the gist of it.

Astronaut Robert Thirsk will be heading to the ISS in May 2009 for a 6-month stay to help out Expedition 19/20. Astronaut Frank DeWinne also be joining him. They will leave onboard a Russian Soyuz (19S). With the help of Dr. Guilles Clement, a renowned neuroscientist, we will be proposing an educational project for Astronaut Thirsk and DeWinne to perform. Our project will be to determine the effect the space environment has on the astronauts when they view 2D and 3D ambiguous figures. What are ambiguous figures? Figures that allow for more than one perceptual interpretation, each of which is accurate. So we need to fine-tune a software that will present the figures and record data they are selecting, develop crew procedures, and complete some other documentation by the end of the month. We're a team of about 15 students, and it is intended to have the ISU students of next summer interpret the data. Now, we're not certain that our project will get approved, but there is a pretty good chance. Today, Astronaut Thrisk and Dr. Guilles Clement were helping us in answering questions and listening to our suggestions. We're making good progress and I think we can definitely finish by the end of the month! Here are a couple of ambiguous figures that are pretty common: 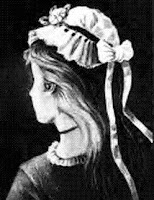 The brain, and not the eye is the true organ of visual perception. In each of the illustrations, notice how difficult it is to see both images simultaneously. This difficulty arises because your perceptual system prefers to make only one interpretation at a time. Go brain power! :)
Posted by Damaris Sarria Toepel at 5:01 PM

Too true. Look at the images and you see one or other, receive (or stare at) the image and it's quite easy to see both.

I think is in the museum in Figueres... I don't know if it is near to Barcelona... mmmm...

The Dali museum is near Barcelona, but I need a car to get there. :(

Just look for a driver and say "I am an astronaut and this is an emergency, I need your car" :P

Don't worry about the Dali Museum, I'm taking you there after the exam. If my Israeli license is valid here in Spain :)