Tomorrow we have three lectures and right after the third one, the Spaceports team (my team project) will be going on a site visit to a city called Lleida. A new airport is planned for the town of Alguaire. The sponsors of our spaceports project are also the ones who are working with the development of the new airport. There is a possibility that we may do a case study as part of our project on whether a spaceport at this location is feasible.

I have also been assigned to the Space Life Sciences department which I am very happy about. I really am interested in the human body effects and other aspects that space activities will have in the space environment. We also get to do a SCUBA diving activity to simulate an astronaut training activity.

On Monday, we had three working sessions where we played out a scenario that one of our team members was an astronaut with particular symptoms. We had the manual that they use on the ISS to diagnose certain conditions. We were able to determine what medicine was required and had to think of how to deal with the astronaut's condition in the space environment. Our astronaut ended up having a urinary track infection.

A very cool tool we were able to use was the Advanced Diagnostic Ultrasound in Microgravity (ADUM) software. In space, there are times that someone may require an ultrasound in order to further diagnose a condition. But since not everyone on the crew may be a doctor, this software helps the astronauts determine where to position the scanner and how to tilt it to get a better view of a particular body part. The astronauts practice with this software as well to understand the output of the ultrasound machine as well. The picture below show Commander Leroy Chiao performing the ADUM Bone Scan on the knee of Flight Engineer Salizhan Sharipov during Expedition 10. 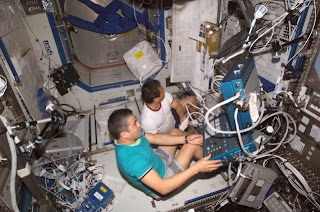