Send your name to space! 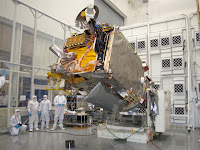 Send you name to the Moon on board a Lunar Reconnaissance Orbiter
Website: http://lro.jhuapl.edu/NameToMoon/index.php
(Deadline is July 25, 2008)

The Lunar Reconnaissance Orbiter (LRO) is the first mission in NASA's Vision for Space Exploration, a plan to return to the moon and then to travel to Mars and beyond. LRO will launch no earlier than November 24, 2008 with the objectives to finding safe landing sites, locate potential resources, characterize the radiation environment, and demonstrate new technology.

Submit your name using the form at the following website and it will be stored on a DVD and rocketed into space on board the Kepler spacecraft!
Website: http://namesinspace.seti.org/
(Deadline is November 1, 2008)

Kepler is NASA's first mission capable of detecting Earth-size and smaller planets in the habitable zone of solar-like stars. The spacecraft is planned to be launched from Kennedy Space Center in February 2009. The spacecraft will be launched into orbit around the Sun, not the Earth, with an orbital period of 372 days. The spacecraft will slowly drift away from the Earth, such that in about 25 years it will be half an Earth orbit away, 300 million kilometers distant from the Earth, passing behind the Sun as viewed from Earth.
Posted by Damaris Sarria Toepel at 12:27 PM